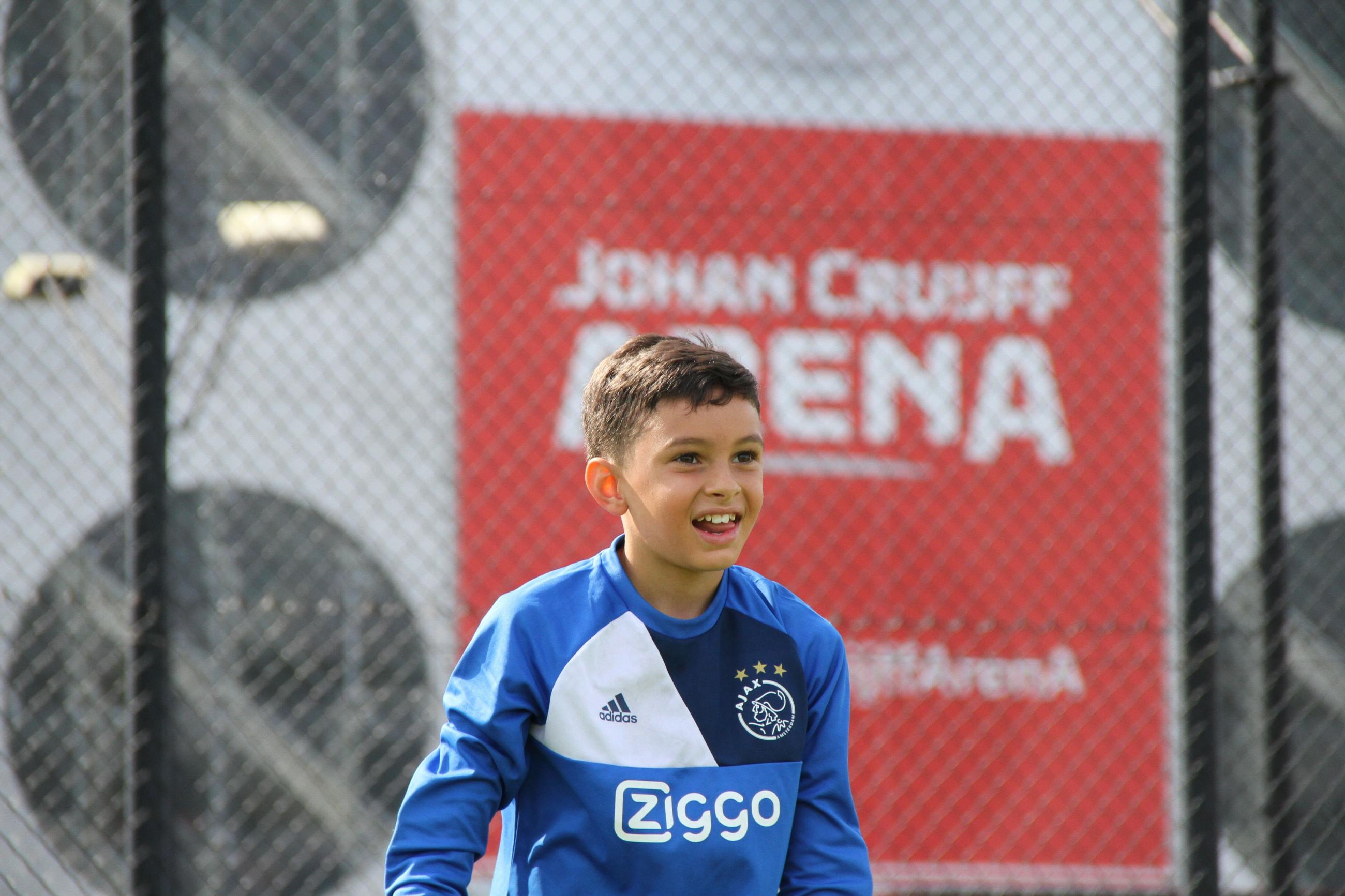 Great that you’re participating in the Ajax Camps & Clinics for the fourth year this summer! Where are you from?
Thanks! I’m from Chicago, Illinois,and I’m playing soccer at the Chicago Sockers. I’ve been playing soccer since I was five years old and I was eight years old when I first joined the Ajax Camps & Clinics. My aunt lives in the Netherlands, so when my dad visits her in the summer, I can participate in the camps. I participated in both the Ajax Keepers Camps and the Ajax Players Camps.

Which of those Ajax Camps you participated in do you prefer?
Well, I first started with the Ajax Keepers Camps, since I used to be a goalie. The difference is that, during the Ajax Keepers Camp, everymorningsyou practicediving, saves, positioning and what to do when you receive the ball. At the Ajax Players Camps you work mainly on skills and ball techniquein the morning. After lunch, the goalkeepers will go past each field team whowillpracticeshooting,  1-versus-1 or 1-versus-2. Both Ajax Camps were really cool, but in the end, I changed my position in the field because the team I play for at home didn’t give me much shots, as a goalie. So, being a forward gives me more opportunity to play the game. But maybe,if I get taller, I’ll go back to being a goalie again.

How did you experience the first time you participated in the Ajax Camps & Clinics?

I remember the first time and how we started with the opening ceremony. Everyone could bring their flags and I brought mine too. My dad records the opening ceremony every year, so I like to look back and watch the tapes from each year. I also look up the pictures that you guys take and put on Facebook. These are nice memories to collect.

But, the first two days of my first Ajax Camp I didn’t really understood wat was going on. I was just going with the flow and did what everybody told me to do. After those two days, I started to get to know way more people and I got more sense of what was going on. Also, the coaches and players make it easy for new kids to find their way and get along with everyone. The other times I participated in the camps I tried to meet up with Alex, he’s from Amsterdam. Also, I always look forward to seeing the coaches again.

Good to hear that you and your friend Alex try to meet up! What do you like so much about the Ajax-coaches?

The coaches are really funny, they’ll play together with you and make jokes in between practices. They’re serious but not strict or mean, just real serious about soccer. My favorite coach is a  goalkeepers-coach, his name is Nick. He motivates you, is funny and if you have no idea how to do something, he will walk you through it from start to finish, until you understand. I like the balance the coaches have between being funny and serious about soccer. Also, the coaches really know what they’re doing.

If you were to choose your favourite part from all the Ajax Camps that you participated in, what would that be?

For me that would be playing on the streets. That is probably my favorite part, since my favorite type of soccer to play is in a small area. I do that a lot at home as well, with my friends. You have to play more conservative, don’t just run through the field and remember to keep passing the ball. Also, the coaches teach you exactly what you should do in what scenario, so when to pass and all. Oh, and the last day when we play all these mini games and tube soccer. It’s this combination I like most, the combination of street soccer and having fun. The reports and evaluations are really helpful to me, to become MVP one day. They show you how to improve your game and what you need to practice on more.

Did you win any prizes at the Ajax Camps?

For sure, I won a few prizes at the Ajax Camps in the last couple of years. Last year and the year before that, I won the obstacle course. I also won the goalkeepers award and the 1-versus-1. Last year became second in the 1-versus-1 game. One year I got super close to receiving the MVP-award, because I received so many awards that year. But, a younger kid received that one. It’s so hard, you have to act like a real professional. So, even if you’re not on the field, you need to behave, listen to the coaches and do what they tell you to do.

That’s a lot of prizes right there! Do you have one particular Ajax-player you take as example, when you play soccer yourself?

Dolberg, for sure! He plays in the same position as I do. He plays itin this position how I would like to play in it. You see, most forwards are trying to only get the ball, but Dolberg understands that you need to pass a lot as well. He does what needs to be done and takes risks. As a goalie, I take Onana as example. We  met him once, on the day Ajax played against Olympique Lyon and he was super nice to all of us. I hope to see them again this summer.

Are there any tricks or techniques you learned during the Ajax Camps & Clinics, that can help you to play like Dolberg?

The Johan Cruijff turn. I use that one all the time and this one technique where you roll the bottom of your one foot over the ball to the other foot and then shoot. I use that last one a lot to score my goals.

Cool! Thank you for the interview Quinn and we’ll see you this summer!