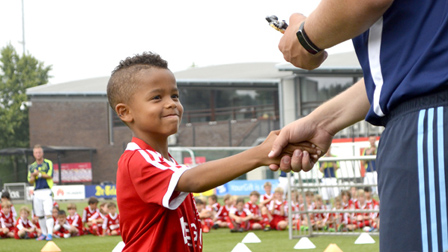 This summer Ajax will open her doors once again for all youth between 6 and 16 years of age. Players and goalies from all over the world get the chance to train like a real Ajax-player. But training like an Ajax-player, what does that really mean? We asked Gerald Alders.

After participating in an Ajax Camp two times and training in an internship at Ajax, Gerald started this season in one of our youth teams. Right wing, striker, mid-mid, it doesn’t matter for Gerald. As long as he can give great assists or score beautiful goals.

‘The first Ajax Camp really changed me.’ Tell Gerald. ‘A guy from my old club, when I was still playing there, told me he was going to participate in an Ajax Camp. He asked me if I was coming too. After that I signed up. The first time I was there it was so different then anything I was used to. It took me some time to settle in. The level of training and handling speed of exercises was so much higher. As well as training together with other kids with similar skill-level. I became so much better.’

‘A lot of exercises at the Ajax Camp are the same with the training I get weekly at Ajax. Only difference is now I’m training with my teammates, not with kids from all over the world. I keep getting better as well in the tests we took last summer at the Camp. I don’t know why, but for some reason I like the bread we get during the lunch so much as well. But of course the parts of the Ajax Camp I loved the most were the final games.’

Last summer Gerald won two prizes. He won the 4v4 mix tournament, for which he received a medal but the cup he won is extra special. Due to his great attitude, positive mind and talent he got selected MVP, Most Valuable Player, of the Ajax Camp. ‘The cup, medal and players report I got are all still standing in my bedroom!’ says Gerald proudly.

This Saturday Gerald plays a home game with his team, the E3, against PSV Eindhoven. Eager to win and score a goal, he will share this last tip for all football players who desire to play for Ajax one day: ‘Keep training and having fun!’.

Do you want to train as a real Ajax-player? Sign up here